Your Property Success | Property prices are rising, will interest rates be next?
Your Property Success is an online step-by-step framework that helps homeowners and investors buy the right property at the right price. Visit for more.
17889
post-template-default,single,single-post,postid-17889,single-format-standard,inf_infusionsoft,ajax_fade,page_not_loaded,,qode-title-hidden,qode-child-theme-ver-1.0.0,qode-theme-ver-16.6,qode-theme-bridge,wpb-js-composer js-comp-ver-5.5.1,vc_responsive

Property prices are rising, will interest rates be next? 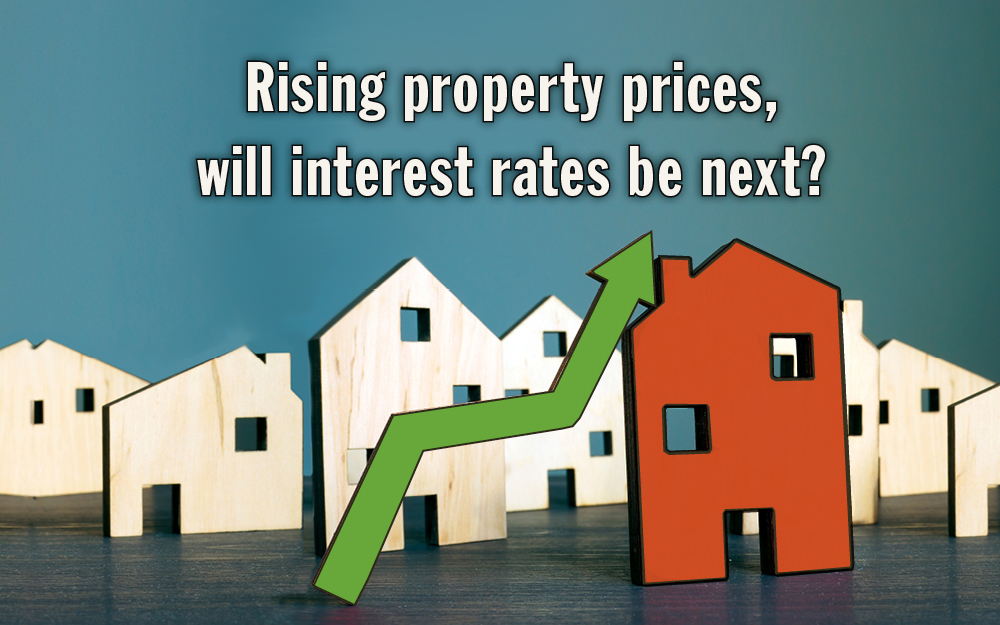 Many Australian homeowners haven’t seen anything like it – values rising at their fastest pace in 32 years, property searches hitting record highs and selling at unprecedented speeds.i,ii Throw in historic low interest rates, and all signs point to a market with no signs of slowing down.

Despite Philip Lowe, the Reserve Bank of Australia (RBA) Governor, maintaining that rates will remain at 0.10% until 2024, a hot housing market has led to speculation of an imminent official cash rate rise.

A timely message from the RBA

In March, Governor Lowe said the outlook for the global economy had improved over the first few months of 2021, largely due to the rollout of COVID vaccines.

“There has been strong growth in employment and a welcome decline in the unemployment rate to 6.4%. Retail spending has been strong and most of the households and businesses that had deferred loan repayments have now recommenced repayments. GDP is expected to return to its end-2019 level by the middle of this year,” he added.

However, Mr Lowe sited that although house prices were increasing and housing credit growth to owner-occupiers had picked up – investor and business credit growth remained weak. Basically, it doesn’t matter if our post-pandemic economy is improving because the RBA still has a “to do” list it wants to check off before a rate rise is on the cards. There will be no movement – according to the RBA – until it sees sustainable changes in three traditionally slow-moving components of our economy; jobs, wages and inflation.

“The Board will not increase the cash rate until actual inflation is sustainably within the 2 to 3% target range,” Mr Lowe said, adding that the unemployment rate needed to sit in the low 4% range.

“The Board does not expect these conditions to be met until 2024 at the earliest,” he said.

Lifting the cash rate is not the only tool in the RBA’s arsenal to combat skyrocketing house prices. The board is tipped to set its sights on lending standards before anything.

“Through previous housing cycles, the factors that generally slowed the housing market were either rising interest rates, worsening economic conditions or tighter credit conditions. Looking at each of these factors, we aren’t expecting a lift in short-term mortgage rates any time soon, and the economy has some positive momentum, so the most likely factor that will slow housing conditions is a new round of credit tightening along with housing affordability becoming more of a challenge, especially for first-home buyers,” Tim Lawless, CoreLogic’s Asia Pacific head of research, wrote in his April blog.

Mr Lawless added that the introduction of stricter macroprudential policies is a matter of “when, not if”. Such controls, where the Australian Prudential Regulation Authority (APRA) directs lenders to restrict credit, could include a clamp down on new interest-only loans or a reduction in the debt-to-income ratio for new borrowers.

What goes down, will eventually go up

While the RBA looks unlikely to budge the official cash rate anytime soon, that doesn’t mean lenders won’t put up both fixed and variable rates independently – a move that could potentially create a financial shock for many new loan holders.

According to comparison site RateCity.com.au, there are approximately 1 million homeowners in Australia who have never even experienced an interest rate rise.

Sally Tindall, research director at RateCity, said it was concerning that some people, who are financially stretching themselves to get into the property market today, haven’t considered if they could meet their repayments when either rates rise or they come out of a fixed loan scenario. “The next hike might still be three years away but when it comes to a 30-year mortgage, you need to think long term,” Ms Tindall explained.

“When applying for a mortgage, banks factor in a 2.5% buffer on the ongoing rate. However, people should stress-test the loan for themselves. If you’re taking out a fixed home loan today, make sure you can afford the repayments when the revert rate kicks in, factoring in potential RBA hikes and a safety net,” she added.

To know how you can make the most of record-low interest rates, and better understand tightening lending conditions, contact us today.