Your Property Success | Rates on the rise – time to lock in?
Your Property Success is an online step-by-step framework that helps homeowners and investors buy the right property at the right price. Visit for more.
17950
post-template-default,single,single-post,postid-17950,single-format-standard,inf_infusionsoft,ajax_fade,page_not_loaded,,qode-title-hidden,qode-child-theme-ver-1.0.0,qode-theme-ver-16.6,qode-theme-bridge,wpb-js-composer js-comp-ver-5.5.1,vc_responsive

Rates on the rise – time to lock in? 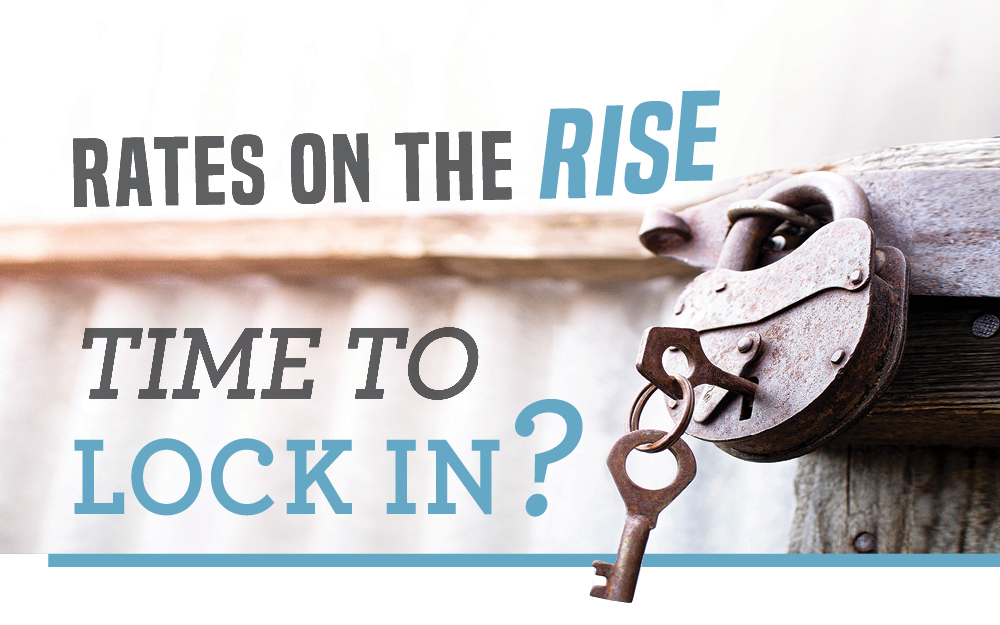 Fixed term rates have never been lower in Australia but with some lenders starting to move fixed rates and further changes on the horizon, is it time to have a look around to ensure you are getting the best deal?

Here’s what you need to know about what’s happening to help you decide whether or not to fix your rate.

Interest rates have been at an all-time low for quite some time now due to the COVID-19 recession, with the RBA cutting the official cash rate to 0.1% in November – down from the previous record low of 0.25%.

The current low rates have boosted Australia’s property market, with over 100,000 first homebuyers buying property since the start of the pandemic.i

These low rates have also spurred existing mortgage holders to review their arrangements. If you’re looking to refinance, you’re joining a growing number of Aussies doing so – 1.5 million according to a recent survey, with 45% of new lending occurring at fixed rates – this is usually around the 15% mark, so it’s a notable increase.ii

Despite the RBA stating they don’t intend to raise the official cash rate until 2024, some lenders have started to increase their longer-term fixed interest rates.

Concerns about inflation are having an impact on fixed rates. There has been conjecture that the RBA may be forced to increase their rates earlier than 2024 to put the brakes on inflation as the economy recovers from the COVID induced recession.

The anticipation of changes to lending conditions are also contributing to the possibility of increasing interest rates. Lenders have been able to access money at very low interest rates through the RBA’s term funding facility which was put in place to mitigate the impact of the coronavirus crisis, however this expired on June 30.iii And with bond yields on 4-, 5- and 10-year fixed rates increasing, there is pressure on lenders to increase longer-term rates.

Money website Mozo recently reported that at least 25 out of 99 lenders have increased their fixed rates since January, the majority being for 4- or 5-year terms.iv

Is it worth fixing your rate?

Despite the some lenders beginning to lift some fixed rates, it can still pay to look around for lower rates. Refinancing can put you in a better financial position and fixed rates could be the way to go, but it’s worth being mindful that if you need to break a fixed loan early, this could prove costly.

And even with record low rates, always be aware of the possibility that rates can drop, in which case you could be spending more. Fixed rate loans also tend to be more restrictive than variable as you won’t be able to make additional repayments, or if you are, they will be capped. They also tend to have fewer features so you won’t be able to link to an offset account or redraw funds.

Should you want out, you will have to pay a ‘break fee’, and this doesn’t tend to come cheap. Savings.com.au reported break fees from a few thousand dollars to much more, so this is something to keep in mind. While fixed rates are less flexible than variable, it could be argued there has been no safer time to choose a fixed rate than now, so you’re less likely to want to get out of the loan.

If you have an existing loan, it’s always a good idea to reassess your rates and check that the type of loan you have in place is the best match for your circumstances. And for prospective homeowners, it is important to get advice on what loan is most appropriate for you before signing on the dotted line. There are a lot of things to take into consideration beyond getting the best rate so reach out today to find out more.